Blogger has been acting weird for weeks, so we're over here now: http://threegirlsmovewest.wordpress.com/ See you there!

Posted by cicadalady at 6:06 PM No comments:

I took Evie to the orthodontist this morning to get her braces off. After a year of trying to floss with braces, I wasn't sure who was more excited about the appointment. Then Evie came out, brace-free, with a bag of Bubble Gum, caramels, Laffy Taffy and Mars Bars and a huge white smile... and I realized she wasn't even thinking about the whole flossing issue. She still might need braces again when she's a teenager, but for now, we're just celebrating her beautiful smile. 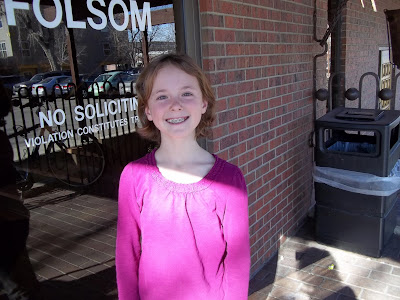 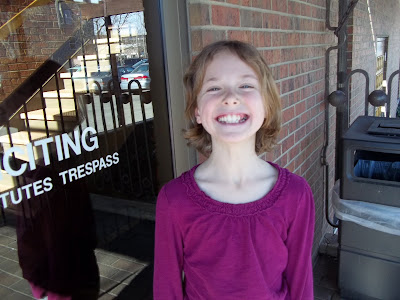 Posted by cicadalady at 12:43 PM No comments:

My new year began with a burning bowl ceremony in a yoga studio in Weaverville, North Carolina. (Well, technically I guess 2011 began on a dance floor in Asheville at 12:01 am, but that doesn't have quite the same ring to it). The instructor handed us each a sheet of paper and asked us what we’d like to release in 2011. Our answers were burned together in a bowl and sent out to the universe. And so, as the universe already knows, this year I am releasing stuff.
By stuff, I mean junk, crap, clutter, what I see when I walk into the girls' room and look at the floor and what is surrounding my computer on my desk right now. In Kingston's book Clear Your Clutter With Feng Shui, she explains that "any kind of clutter creates an obstacle to the smooth flow of energy around a space. This in turn creates stuckness and/or confusion in the lives of the occupants". With three growing girls, we have a lot of energy around our space. Keeping it flowing smoothly seems like a good idea to me.
To add to my desire to get rid of clutter, we are moving into a not-so-big house in May (fortunately just down the street this time). So now, along with seeing every pile of clutter on the floor as blocking our energy, I also am starting to see it as something I'm going to have to physically move. It's amazing how quickly that detaches you from objects.
I have to say, as far as resolutions go, I am off to a good start this year. Last week, I took three garbage bags full of clothing to Goodwill and I already have two more in the car. Today we sold a television and two car seats on Craig’s List. And is energy flowing smoothly around the house? It is! I can actually walk into the girls' room and feel peaceful.
But I recognize that this is January. It's Resolution Month. The month when optimistic exercisers burn calories on every machine at the gym and packs full of cigarettes are tossed hopefully into the trash. The challenge is to keep this up all year and beyond. I am determined to do it. I have visions of more trips to Goodwill, more books checked out and then returned to the library, fewer purchases of things we don't actually need. And I am finally going to sort through that junk room in the basement.
The only thing that has me a little worried is that as I was writing this, I started to think that I might have written about having too much stuff at some point before. Sure enough, two and a half years ago I made this same announcement. And two and a half years and two moves later, we definitely do have less stuff than we did then, but it's starting to creep up on us again and I can't say that I've held firm in my less stuff commitment.
But then again, I didn't release my intention into the universe in a burning bowl ceremony either. And so, 2011, with the universe behind me, I now pronounce you the year of less stuff.
And if any of you are find yourself in Weaverville, North Carolina anytime soon, I know of a great little yoga studio.
Posted by cicadalady at 6:31 PM 5 comments:

How to Teach Your Three-Year-Old to Ski 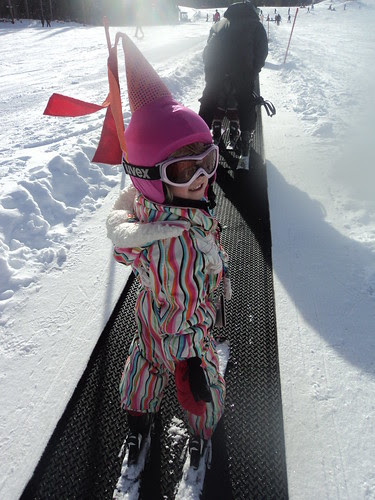 You will need:
- Two skis
- Two ski boots
- One helmet
- One princess helmet cover. This is not actually necessary for teaching skiing, but will make your daughter feel like a rock star when people she doesn’t know ask to take her picture. Also, once she learns to ski, it’ll be easier to find her in the crowd. If your child isn't into wearing a princess helmet cover, there are lots of different options. (click here) If you really want to stand out in the crowd, you might want to check out the matching family raccoon helmets they show on there...especially if you want your child to learn to ski away from you really quickly.
-One harness
- One Edgie-Wedgie
- 300 chocolate chips and gummy bears
On the first day of skiing, you might think that holding your child between your legs while you ski down the mountain seems like a good idea. Unless you want to support your local chiropractor, investing in a harness is a smart move. It’s a great way to allow your child to balance on her own without breaking your own back. Once she gets the hang of this, you can just enjoy that your child can get down the mountain and that she enjoys the feeling of skiing. And you can enjoy some new ski-related conversations, like how the “magic carpet” at the ski area differs from the magic carpet that Jasmine rides on in Aladdin.
Of course, when you take the harness off your child, you’ll realize that while she may have learned to ski, she didn’t actually learn to stop. Which is kind of important. Here’s where the Edgie-Wedgie comes in handy. The next step is to take your child off the harness and attach the Edgie-Wedgie to her skis. If you consider yourself the type of parent who is above bribing her child, you might just attempt skiing backwards in front of your child yelling “Make a pizza! Pizza! Pizza!” She’ll look at you like you’re crazy, with her skis in perfect parallel lines, before crash-stopping into you and telling you she wants to get some lunch. And pizza will sound kind of good to you too.
At this point, you might as well just give in and accept that bribery can be really effective at times. Then you can fill your pockets with gummy bears and chocolate chips and attempt the backwards skiing pizza drill again, handing out a piece of candy every time she makes a snowplow. And this time? It works. Your child may gain her weight in gummy bears before she learns to ski, but there’s nothing quite like watching her go down the mountain with a huge smile on her face, yelling “I’m skiing!” Of course, it’s not a perfect system. On the last run of the day yesterday, I told Noni to “make a pizza” and she asked, “Why? You’re out of chocolate chips.”
Posted by cicadalady at 5:27 PM 1 comment:

In the winter months, when it's too cold for the park or the soccer field, it's always nice to find a non-messy craft that will occupy the girls. The fort that they recently made out of blankets, string, stuffed animals, pipe cleaners and paper boxes does not fall into this category. Melissa and Doug Sticker collection sheets do.
Over Thanksgiving, the girls' friends Cam and Drew introduced them to the sticker sheets and since then they've been hooked. Noni particularly likes the fashion collection and Evie and Lucy love the make-a-face book. The sticker books have become our go-to birthday present these days. If you're looking for a holiday present that will keep your little one entertained for hours, I strongly recommend them. They are available at Childish Things in Boulder or online at amazon.com. 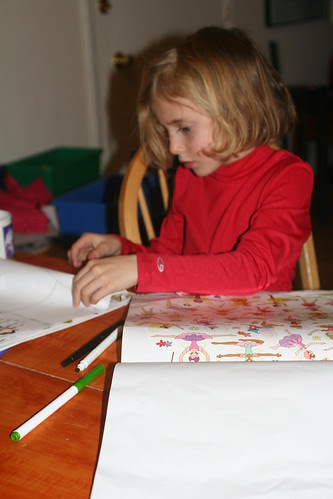 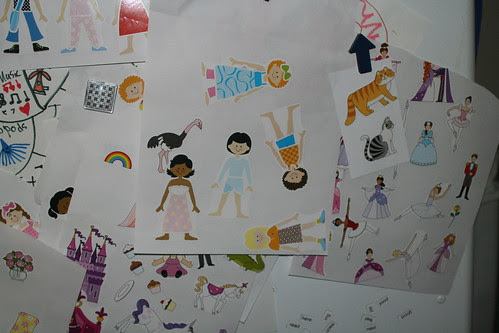 Our fridge, courtesy of Noni

Posted by cicadalady at 6:40 AM No comments: 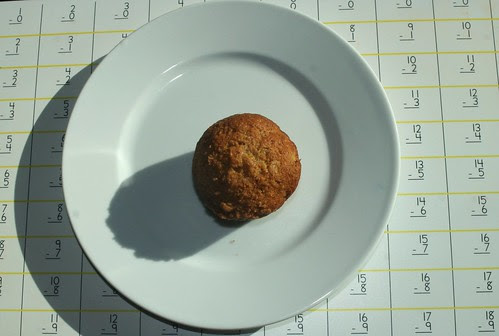 For the past few weeks, I have been helping teach Evie's math league. It's not a natural fit for me. I either lack a natural propensity for math or else lack enough of an interest to be competent in it. My daughter, however, fills notebooks with calculations in her free time and I want to support this interest.
After I offered to volunteer, I immediately felt apprehensive about my ability to actually teach the class. So I decided that I would bake some muffins to bring to her math league. That way, even if I didn't do a great job, everyone would still find me to be a respectable volunteer.
The kids loved the muffins and the first day was a success. And it turns out that despite getting D in Calculus in college, I am quite capable of teaching fourth grade math. However, I wasn't capable of calculating that after I brought muffins once, the kids would come to expect them each time. And so Tuesdays have become baking days as Noni and I experiment with making pumpkin and banana and chocolate chip muffins. Today, I made apple strudel muffins and they came out so well that I wanted to share. Below is the recipe, slightly modified from a recipe I found on allrecipes.com. They don't actually make you better at math, but they do taste good. Enjoy!
Posted by cicadalady at 8:50 AM 1 comment:

I just thought I'd take a moment to let you all know that my new book is now available at both Blue Mustang Press and Amazon.com! You can get up-to-date information on my book on the Francie's Fortune Facebook fan page (try saying that five times fast...) or the website http://www.franciesfortune.com/. Thank you so much for reading my blog. I hope you enjoy my book as well!
Posted by cicadalady at 6:16 AM No comments:

cicadalady
Why am I "cicada lady"? When my oldest daughter was two years old, the cicadas invaded our then hometown of DC. My mom and I wrote a book, Cecily Cicada, to help teach Evie about the cicadas. I recently wrote a middle grade fiction book, Francie's Fortune. Information about the book is available here: www.franciesfortune.com. My blog is my continuous writing outlet and I use it to share thoughts about life and raising three girls. Thank you for reading!